skip to main | skip to sidebar

I'm a thinking man. I can't help it... fortunately. I think at noon, night, dusk, dawn, and times in-between. I think when i eat; how delicious or salty is this banku and okra soup? or mmm...nourishment. I think when i shit; geez, can't believe i held it in this long? & how am i going to fix that Protools mix? I think thoughts so much i start to think I'm thought. Amusing thoughts, confusing thoughts, black thoughts, brown thoughts, Twi thoughts, English thoughts, and what was that drunk-cat-in-the-bus-thinking thoughts.

Maybe I'm a thought process... cause of the way i process thought. For instance i want to backhand slap the fella who came up with “a penny for your thoughts.” i think he lied. Cause my piggy bank would be bigger than Alaska by now, and my banks accounts fatter than the one black dude that won American idol. Foul thought you say...

I think thinking is my right. I swear I'd gladly picket for the right to think. Even though my primary school teachers mostly subscribed it to my genetics. “It's in his nature” they must have said. “Look at his family tree.” Shake it gently and an avalanche of thought-leaves will follow. So much for nurture right?

Regrets? one of the few kind of thoughts i despise. So when you ask me “what were you thinking?” my Scorpio resentment creeps in on the ASAP tip. I think you're deepening a wound that needs nursing. It's hemorrhaging can't you see? Think twice they tell me, and all i can think is that Donald Byrd song. Chale, e hard oh. Pidgin thoughts.

My thoughts are gonna take me places. “I let my mind travel, on occasion my body tags along.” Those kind of thoughts i put in song. Songs i conceive in places of pain, and sometimes dreams, and deliver in syncopated rhyme schemes, seen? The beautyful ones are not yet born. Beautiful thoughts that is. So let me keep impregnating these emotions and translating them thru this, what chu mo call it,....gift. I'm in love with this gift of thought. it's a gift with an infinite source, yes I'll keep giving. You might not like it sometimes. That's cool; It's the thought that counts
Posted by M.anifest at 4:48 PM 1 comment: Links to this post

Very happy with this here. i hope yall dig it. if you do...tell a friend or three.

Imagine an album featuring an all-star Ghanaian cast: Reggie Rockstone, Samini, M.anifest (me? :)), M3NSA, Wanlov the Kubolor, Yasmeen, Sena, AB, DJ Black and Kwesi Dankwa = Pure Awesomeness! Well that album is indeed on it's way June 7th! Courtesy Richy Pitch (London), Producer/DJ/& Soon to be published Author of a book on beatmaking. His Album, "Y3 fr3 me Richy" featuring all the names above will be released on the famed label BBE on June 7th. BBE has put out albums by the great Jay Dee a.k.a Dilla (Welcome to Detroit), Dj Jazzy Jeff, Will.i.am, and more. Great Discography. 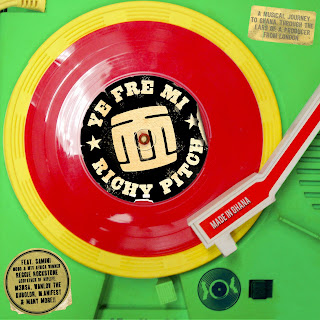 .....and *drum rolls* I'm featured on the first single! The video (which is animated) of the single, "Black Star" will be out in April. Both the song and the video reach for some dope creative styles and i think yall will dig it. I'm also on another song on Richy's album: with M3nsa and Wanlov the Kubolor - quite a collab eh. Richy's discography includes production for the likes of J-Live, Mr Complex, and Asheru. Anyways, much kudos to Richy Pitch. He put in a lot of work whiles living in Ghana the past 2 years to produce this pure awesome record. A good look for Ghana, a good look for music in my opinion.

I arrived in New York Last night. here to do a 15 minute set at a Ghana @ 53 independence celebration show this Saturday March 20th. Click here for details of the show. Shout out to Rych Ent who made my appearance happen. New York is a fascinating place every time i visit. still i had my mouth open at one of the first things i saw in the city... a car aflame in the middle of manhattan! of course i took a pic 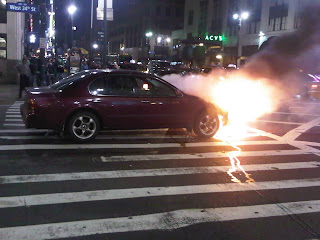 When i return i'll be playing the homey Toki Wright's "BlackMale" EP (Rhymesayers/SoulTools) release at 7th street Entry on Saturday March 26th! it's going to be a funky good time i tell you. Get advance tickets here and invite all your facebook friends here. 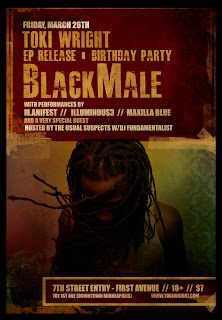 till next time. be beautiful in thoughts and spoil yourself with fun times! Don't be too cool to wild out sometimes. spring!
peace
m.
Posted by M.anifest at 1:17 PM 2 comments: Links to this post

Almost a quarter way through 2010. Time indeed waits for no man, woman and everything in-between. This year's main goal: not to sabotage myself by feeling crippled by the rapidly lengthening to-do-lists i have. but so far so good...knock on wood.

Friday Mar 5th: we had the show with Bamboo, Krukid and I.B.E in Minneapolis. went very well! energy was high! one thing for sure and two things for certain: there were lots of energetic and pretty black, brown, white, African, and all other colors and tribes of peoples. i like how these shows are turning out to be the United nations of Music. next time tho', bigger venue and it should be sold out! bet.

Didn't sleep till 5am that morning. Around 10:30am on Saturday my manager Ashanti calls me up; he was on orange alert for our 4 hr drive to Moorhead, bordering Fargo North Dakota. He gave me a hilarious lecture on how I'm always on African Time and then turns out he was the one on CPT. ha. We got to Concordia College without incident. Have to say they had a very warm group of volunteers and organizers for the event. The panel discussion was very interesting. Hip-Hop has so many different perspectives it could be refreshing or frightening. All depends. Shoutouts to Shin B, Ernest Rhodes, Kipp, and the other folks on the panel.

Suffice it to say, i enjoyed the hell out of the show. The students/crowd were dancing outta control and it didn't matter that the arena wasn't packed. the folks there filled the whole space with their energy. they were vocal and put their bodies into it. that's how it's supposed to be done. Concordia College students at the show - i salute you! anybody got pictures?

Meanwhile On Friday, A.R.M. (the supergroup made up of myself, Krukid and superproducer Budo), released the first single of our "Two Africans and a Jew" EP featuring Slug of Atmosphere (Rhymesayers)! The song is available on itunes here. Get it! Slug and Brother Ali especially have both been so helpful and the amount of gratitude we have is alot. Shoutouts also to DJ Hyphen who premiered the song on Seattle's Kube 93 two sundays ago. 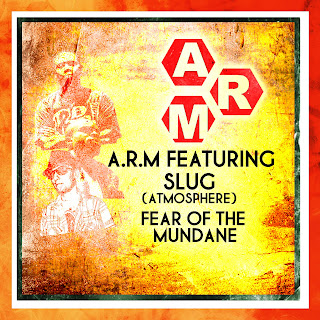 I'll be in New York for a post-independence Show on saturday March 20th together with Kwabena Kwabena. Shoutouts to Rych Entertainment!

To all friends and family who i haven't returned emails or VM's in timely fashion. forgive me and bear with me. i'm trying to get better at it. we'll talk soon.

I'll shut up already :). later is greater. link up on facebook.
sincerely yours,
M.anifest / m diggy dot/ M dododotido
Posted by M.anifest at 5:15 AM 1 comment: Links to this post

- Thursday March 4th: I'll be speaking and appearing at a Hamline University Anthropology class, "Africa, Music, and Cultural Production." Should be an engaging affair.

Last week, i spoke to Toki Wright's class at McNally Smith College of Music in St Paul, MN. i think it's dope Hip-Hop is at the collegiate level. I'm meeting a lot of interesting opportunities in the education realm and i'm looking forward to exercising my intellectual and strategic prowess more. Shoutouts to T Mychael Rambo who was generous in enough to invite him to join in an artist residency t PCYC alternative school, North Minneapolis. The students did a wonderful job and we managed to help them produce 3 songs they performed for the community at the capris theatre on Jan 19th.

enough about me, How's about you? :). later is greater
peace
m diggidy 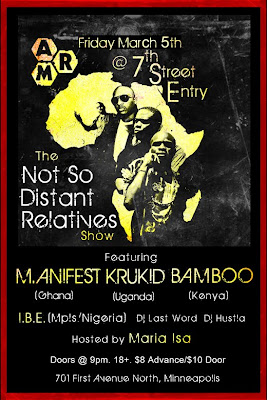 Posted by M.anifest at 6:48 AM No comments: Links to this post